It’s been many years since I’ve done a project like this. Not since my HCS12 Controller back in college. While Arduino is great, something about buying a board off-the-shelf just isn’t the same as doing it DIY. Though this way can be much more time consuming, prone to errors and expensive, it is much more satisfying.

I’ve also been dabbling with the thought of getting into DIY drones.

The one thing they have in common is driving motors using PWM. Most open hardware/software drone projects typically advertise a “Rover” mode. There’s no reason to consider the core of a drone or a rover application to be particularly different.

Icarus was originally my attempt at a flight controller, that I broadened the scope of a bit and generalized to the various projects I wanted to work on.

The goal would be to create a handful of small stackable PCBs:

The scope of this project is to design and build an embedded system that can be used as a controller for multiple robotics projects. Specifically it should be able to drive: diff-drive robots, quadrupeds (8 DOF) and mirco-quads 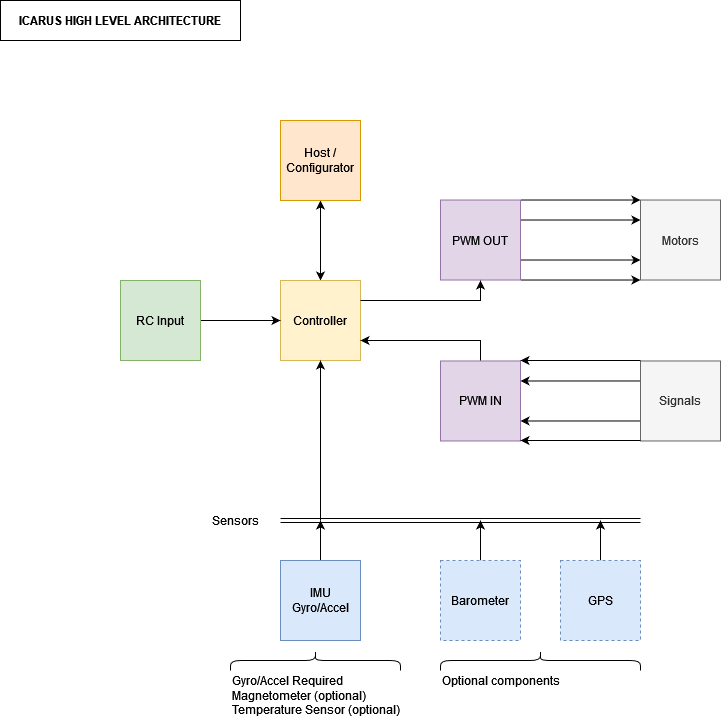 The board will have two inputs for power:

The PDB will be the main supply for a project. The USB power will be for debugging / flashing the MCU.

An onboard regulator will be required to convert VBUS to the appropriate logic level. 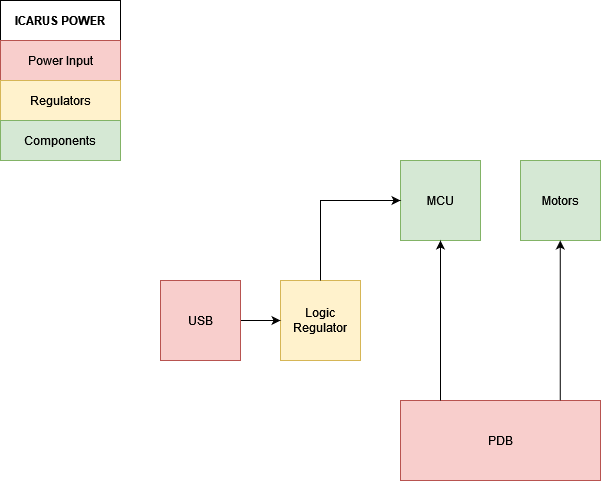 As mentioned above, the board will have to regulate the VBUS input down to 3.3V for logic power. 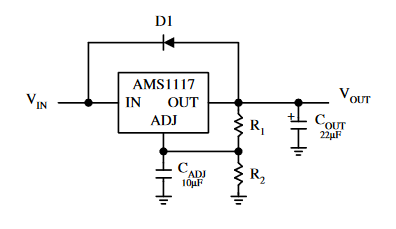 I’m using the non-adjustable version so the diode and feedback resistors can be omitted. The output capacitor is the recommended 22uF tantalum cap.

The power distribution board will actually be a separate project: Kratos PDB

Determine what sensors should be on the controller given the high level requirements.

As one of the purposes of this controller is for drones, understanding orientation in the air will be critical.

There are degrees to orientation sensing and what is required to achieve them, see below:

For the first revision of this board I’ve chosen a single sensor: The MPU6050.

This sensor includes both an accelerometer and a gyroscope which should be sufficient for basic attitude sensing. In future revisions I’ll considering add a magnetometer as it can be added to the fusion algorithm.

The following is the requirements of the MCU given the high level architecture.

This project is intended to drive at least 4 DC motors for a quad-copter and up to 8 motors for a 8 DOF quadruped. In both cases, multiple 50Hz PWM outputs are required.

The board should also be the core of any diff-drive robotics projects, however in order to accomplish that an H-bridge would be required. For that application, an H-bridge IC could be part of a “shield”. Inclusion of the H-bridge on this board will depend on the space requirements.

Ideally the MCU support some type of motor feedback. It could be encoder pulse counting or ADC input from servo position feedback.

Typically various sensors would communicate over I2C or SPI.

In the context of drones there are a number of different receiver types. The fall mostly fall into two categories:

The MCU should support both of these input types.

There will have to be some way to flash / configure the controller. It makes sense to do this over a USB-Serial or USB connection.

The MCU requirements for this project are pretty basic:

I had two go to options:

The STM32 is very common with a lot of reference designs, forum posts, tutorial, blogs, etc. It is also commonly using flight controllers and has ready to use firmware packages (Betaflight).

The nRF52840 has built in BLE and is a smaller package. This is the microcontroller on the Arduino Nano BLE 33 IOT Sense board (the one I’m using on the nanodrone project). Using the BLE hardware will require an antenna, and I can’t seem to find a NINA module on JLCPCB.

Both are ARM processors.

I plan on getting this board assembled using JLCPCB. So the MCU selection is limited to what is available in their assembly library.

I settled on an STM32F302 for the following reasons:

No integrated BLE means the RC input MUST be external to the PCB. 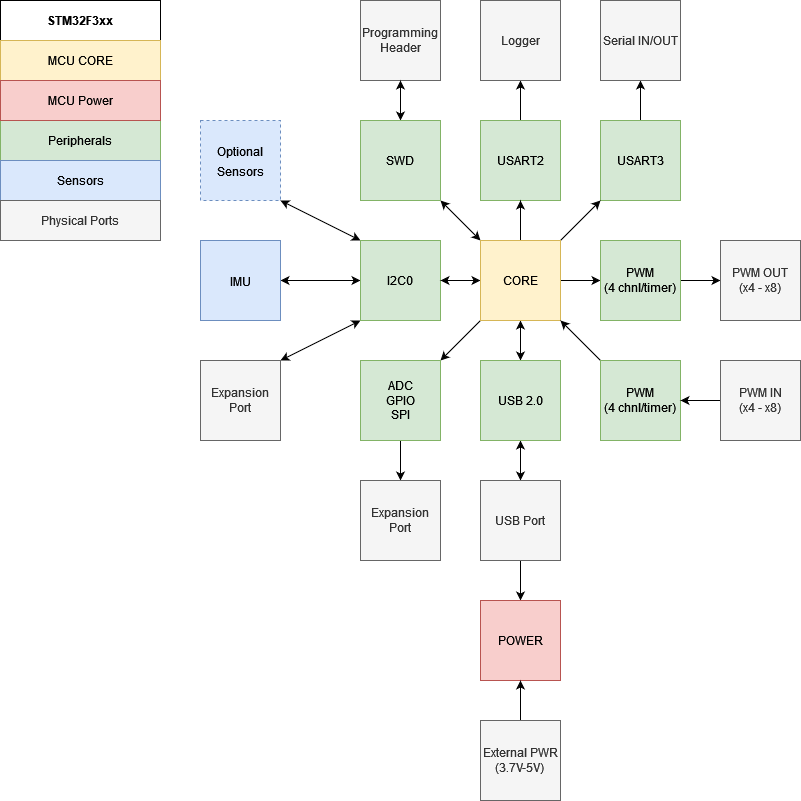 This is a rough break down of what peripherals will be used to achieve the above requirements.

Of course the MCU needs to be powered appropriately and this usually involves a handful of decoupling capacitors close to the MCU VCC pins. 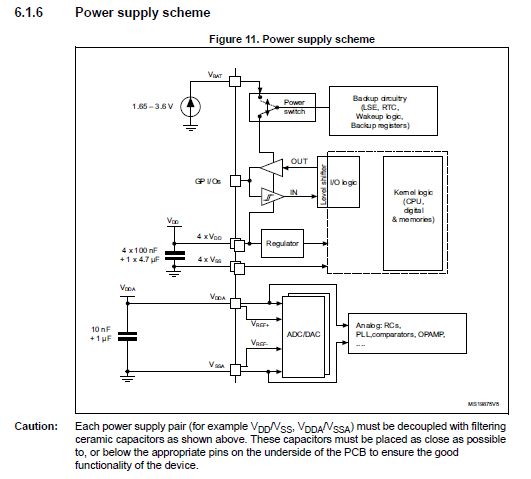 Following the recommendations from the data sheet the filtering network looks like the following:

The device also has to boot into the correct mode and must be resettable as well. 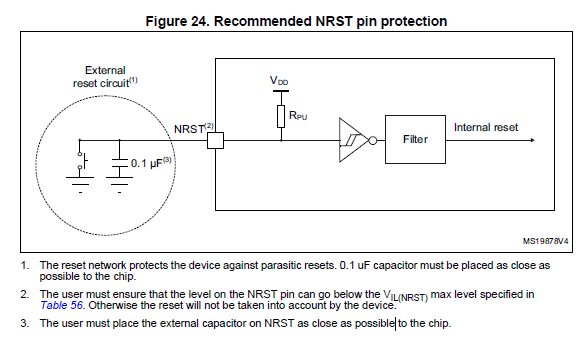 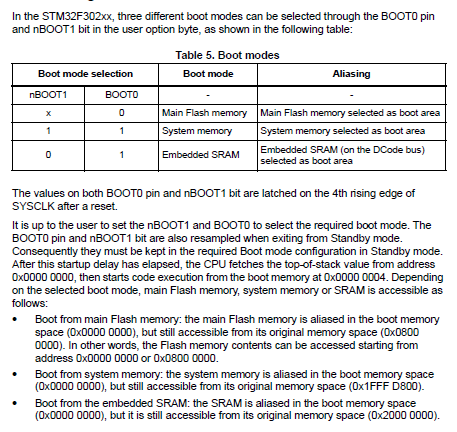 Two push buttons are used to select the boot mode and reset the MCU if needed. 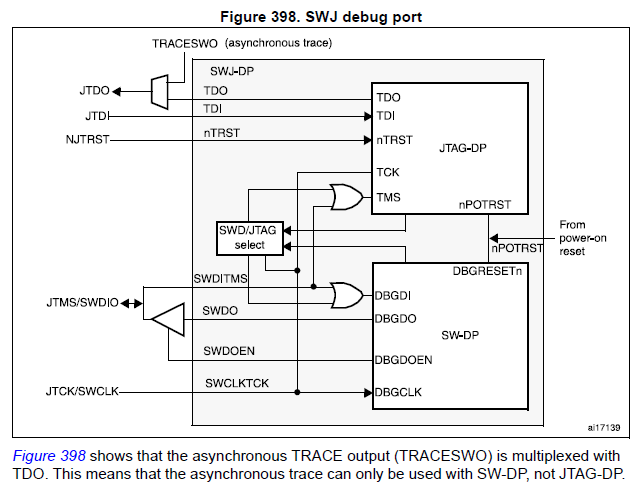 Ideally this board will use USB communication to talk to the host PC for configuration / debugging. The USB peripheral clock requires a 48MHz signal with a maximum variance or 500ppm (0.05%). The internal high speed oscillator (HSI) has a variance of 1.0%. Therefore an external oscillator is required. It is usually called out in the data sheet that an external OSC is required for USB operation.

I decided to use a 12MHz OSC package, it should provide the clock signal on its own without the need of the STM32’s OSC_OUT pin. This means the HSE must be configured to BYPASS mode.

I felt this was easier then selecting the correct crystal and capacitor and I didn’t want to make a mistake picking a crystal with the wrong drive level. 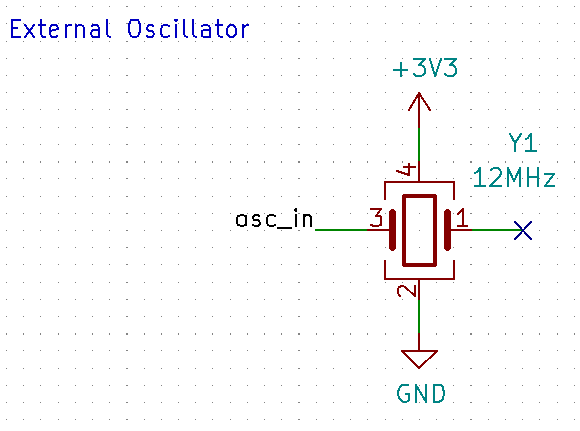 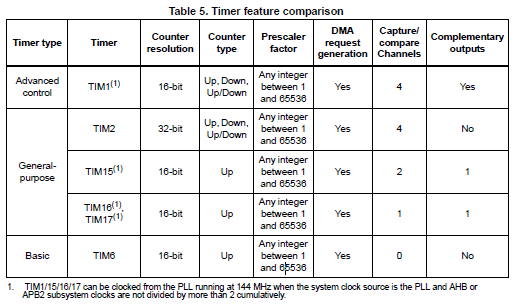 Note: I’ve been designing this with a 8DOF quadruped in mind but given the MCU availability and available timers I couldn’t quite make this work.

The maximum number of PWM pins will be 6 for the Rev A Icarus board.

My initial thought was to create a layout that I could use to interface with the PDB and create “shields” in the future.

The PCB also needs to conform to the standard drone mounting holes. 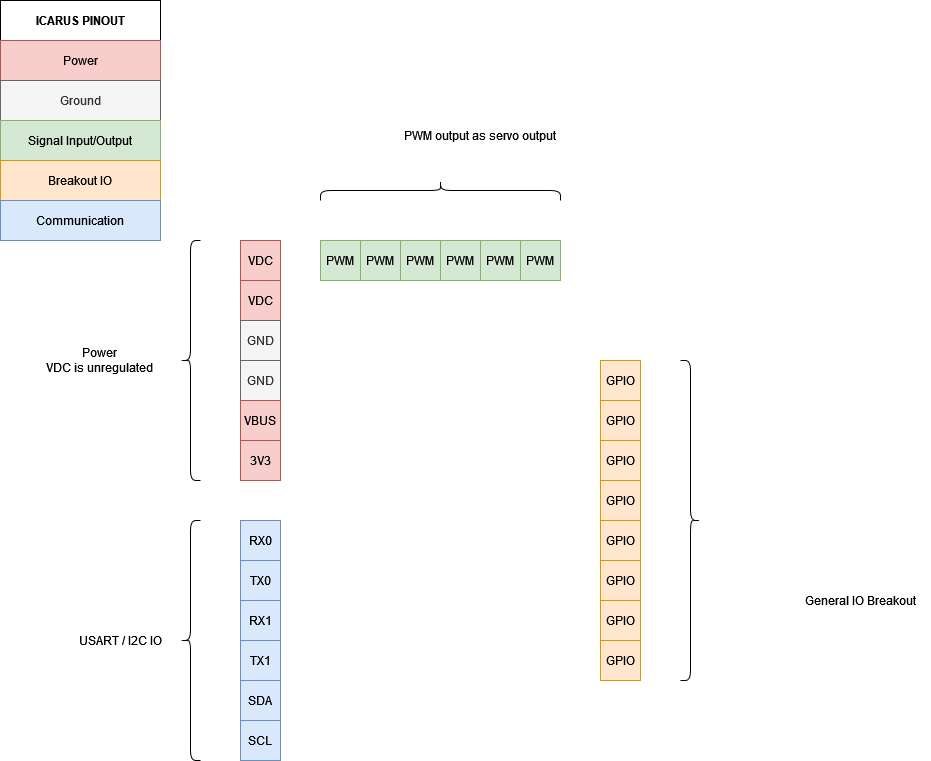 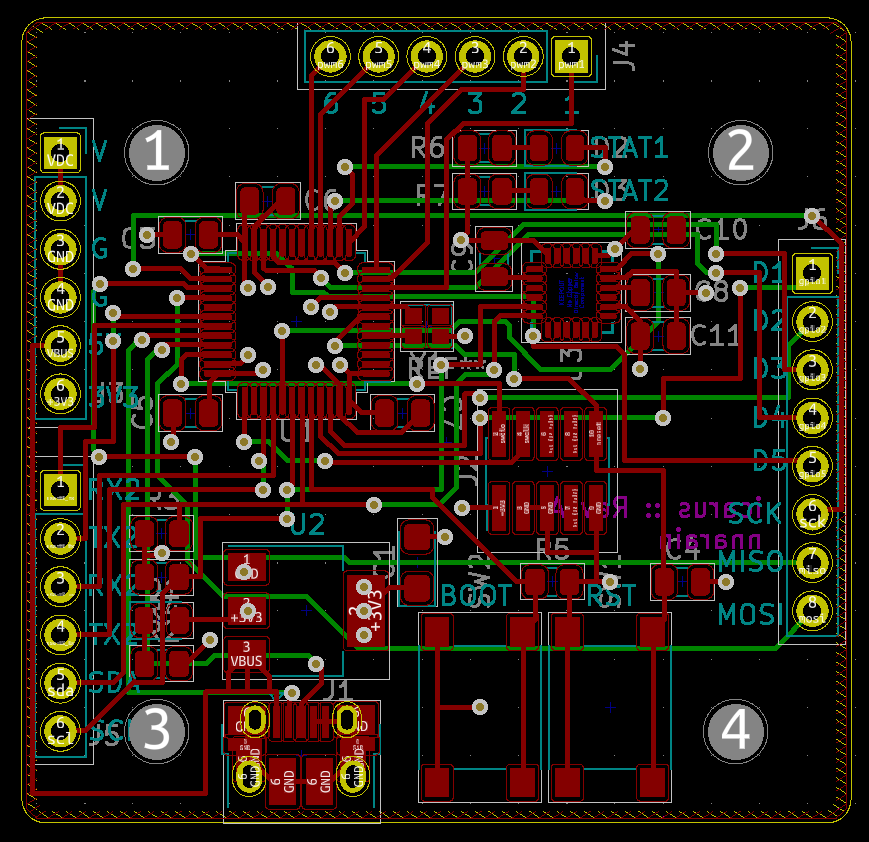 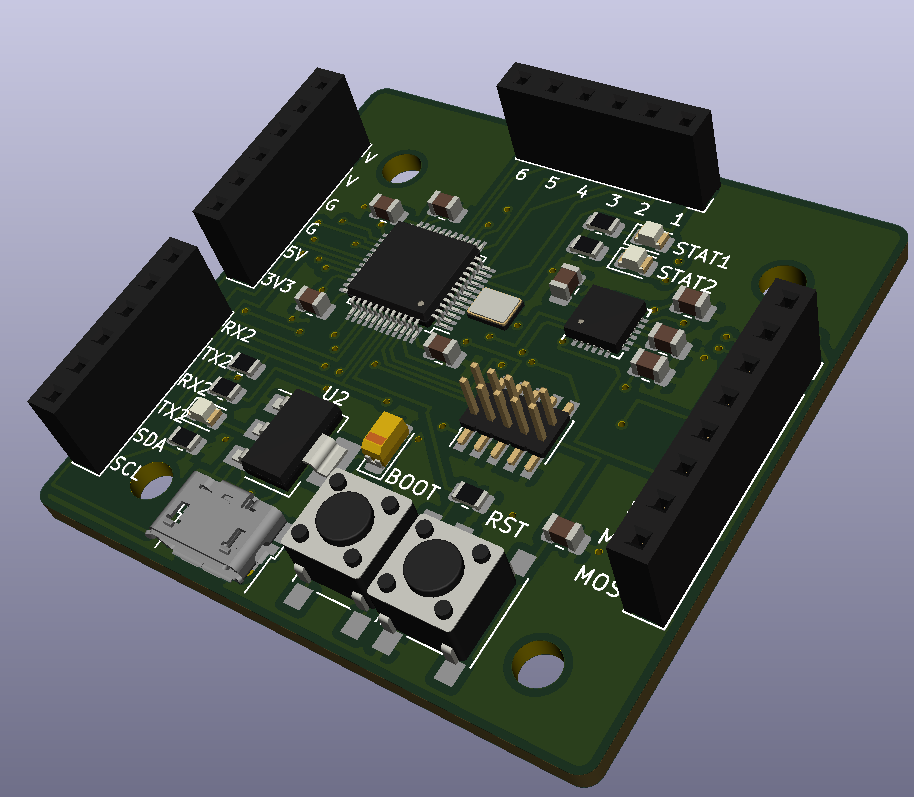